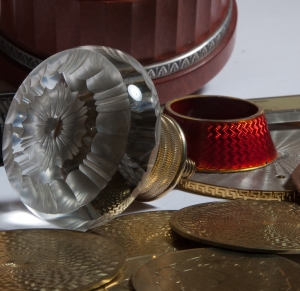 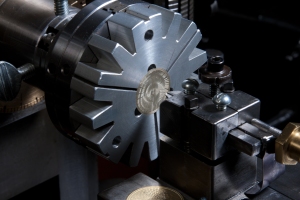 A disc being engraved on a straight line engine turning machine rebuilt, restored, and owned by Lew Wackler

Faberge, Van Cleef and Arpels, Tiffany and Cartier are among the famous houses that utilized engine turned and guilloche engraved work  in their designs. After seeing an exquisite piece well designed, and then executed using these techniques, it is difficult for one not to develop a fascination to know more about the machines used to create them. How far that fascination goes, and in what direction can also be very interesting. Faberge items are collected today and there are often several sales each year at auction  houses such as Sotheby’s specializing in Faberge items and “Objets de Vertu”, which very often include a variety of engine turned objects. Malcolm S. Forbes fascination led him to amass a huge collection of Faberge items, including 9 of the only 50 Imperial Eggs that exist. This collection was due to be sold at auction in 2004, but a Russian oil tycoon, perhaps even more fascinated than Mr. Forbes, purchased the entire Forbes collection prior to the scheduled sale. Tales of the pursuit by those fascinated by them of these rare objects are legend. The fascination found in these posts, however, will be mine. My fascination is not as a collector, but as one interested in using the machines themselves to produce work. It is my hope that others will find a similar fascination and that these posts and pages will become a conduit for spreading as much information as possible to those who are similarly fascinated.